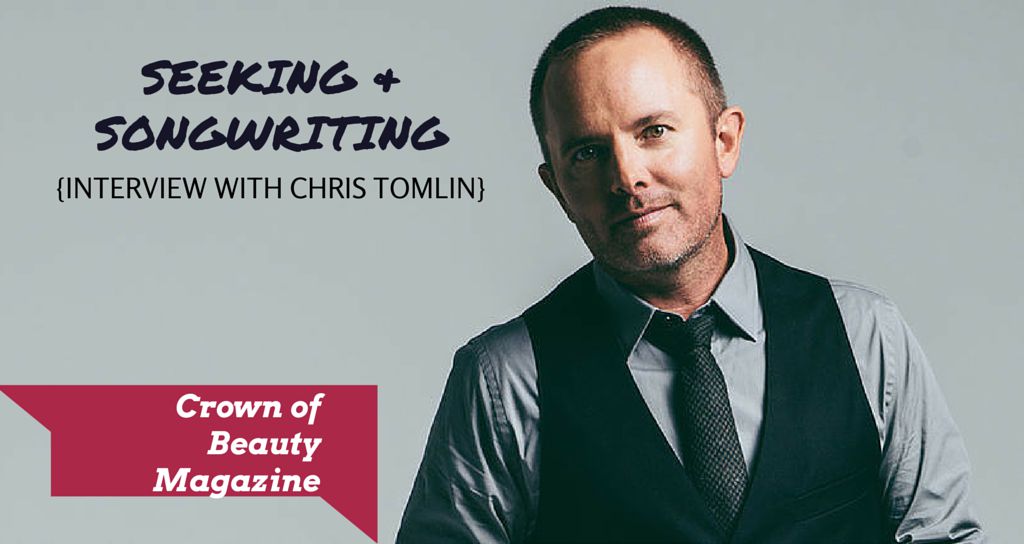 Chris Tomlin has been leading the the church with anointed songs of worship for years now. We were so blessed to ask him questions about seeking the Lord, songwriting and his newest project!

Crown of Beauty: What advice do you have for young people who desire to pursue radical intimacy with God? How can we pursue the Lord?

Chris: That's awesome. That's a question not just for young people, that's a question for everybody. I love that you're asking it.
What I try to say from the stage every night is that I don't have it together, and you don't have it together, but God holds us together. And I think people can look at us onstage like this and say "Wow, he must have this direct phone to God that is different than me, that's so connected." But that's not true, it's the same thing for me, it's about being still. I think in our world it is so hard to be still. And it's getting harder and harder, but it's really about finding a place to be still and meditate on the Word. Psalm 119 says to meditate on the Word. And you're like, "Well, I'm doing that but I feel dry..." well, welcome to a walk with God! Welcome to anybody that you've read in scripture, that you really admire, they have the same story. Anybody that you know, if you talk to your Mom, Dad, anybody that you really respect, they're gonna have the same story. So know that you're not stuck in this place where you're like, "Wow, I guess I don't hear from God." We hear from God in different ways. My wife hears from God in different ways than I do. She's like, "Man, I just sense this from the Lord." And I'm like, "I'm standing right next to you and I didn't really sense that." (Laughs)
But she does. So I think it's being still and being quiet before God, and knowing that you're just normal, and if you're in a dry spell it's not like you're disconnected or you don't have a relationship with God."

how do you continue to ignite CREATIVITY as an artist and a song writer?

Chris: Great question. I love talking about song writing! It's what I'm most passionate about, out of all the things I get to do. I get to play music, sing songs and record, but I love that moment of writing the song. For me, I feel like a lot of the power and anything that's been lasting in the last several years, has come out of relationships with some friends of mine that I write with. They all have the same heart. We get together and ask God, and we pray, "Would Your presence fall on these songs? Would Your presence touch these songs?"
I try to write simple songs, that people can sing and worship God with, and simple is not easy. That's what I say to people, just because it's simple does not mean it's easy!
But I try to write simple songs for the church, and I try to stay focused on that. And if it plays on the radio, fantastic, but really my love is getting in there and saying, "God, would You touch this song with Your presence, that when people hear it something happens in them? Cause people to sing to You, and give them a voice to worship?"
Some of my friends I'm writing with, you have to understand, are some of the greatest songwriters in the world. I mean, my best songwriting partner, his name is Matt Redman, he's the short English guy. He's the most prolific songwriter, I think, that God has given the church of our generation. That's who I like to write songs with. We get together and he lives in London. It's kinda hard but we make sure that we connect, and he comes here or I go there. We sit for days, we sit in his chapel. Last time, "At the Cross" came out of sitting in his chapel. So that's where a lot of the songs come from.

how often do you get writers block?

Chris: I would say that songwriting for me it's not these long blocks. It's very weird, but it's hard to explain songwriting. It's hard to explain how it comes. Now I once heard Paul McCartney stand up and say... he got the Kennedy Award for songwriting or something like that, some big award... and he said, "I don't know how the songs happen. I still don't know how to tell you how they come." And I was like, "Oh yes!" I felt so much more normal after that, because I understand that.
For me it's just pieces, it comes in small pieces. If I pulled out my phone right now and showed you my voice memos, I would scroll through hundreds of little pieces of little things. Nothing ever really comes to me all at once. I never just sit down and the song just comes. I wish I could, I wish I could just write a whole song, but it's always these little pieces. Something from scripture, and it takes me a long time to turn those pieces into something. For example, I just was reading in Revelation, and Louie was preaching on the very last words of scripture, "Come Lord Jesus." And I thought, "I want to write that song." In the King James it says, "Even so, come Lord Jesus." And I wrote the song called, "Even So Come," which is on the Passion record. But it started with just a piece, it was just a voice memo, "Write a song, 'Even So Come Lord Jesus,'” and I had that for probably six months until I finished that idea.
So I guess I live in a continual block (laughs), and every once in awhile these pieces come, and it's just for me to string them together.

what's next for chris?

Chris: Worship Night in America. It's been a vision on my heart for a couple of years, and we're taking the leap this year. We're planning three cities for it this year (in August), and my heart is for it to continue to do two to three cities a year. It is a gathering of the church, to bring unity in the church, from Catholics to Charismatics. I asked my friends if they would join me on this night, so we're playing Madison Square Garden in NYC, Red Rocks in Denver, and we're playing Sleep Train Arena in Sacramento. So I wanted to do like an East, Central and West every year, maybe it moves from DC to Indianapolis, to SanDiego, maybe it's Dallas. But I'm asking God for the right cities for the next year. But it's already going crazy, and I asked my friends from Hillsong, Matt Redman, Matt Mahar, Rend Collective, Kari Jobe- and a couple others, Phil Wickam, Kim Walker from Jesus Culture- if they would come lead with me. And not like a festival style where they do their thing then I do mine, but like all on stage together. And let's just have one thing together and the whole church together, and everybody said “yes!” And I was like, "Oh my gosh, this is really happening." So then I asked Louie if he would come share about worship, and I asked Max Lucado if he would come lead a prayer for the nation, and so that's why it's called Worship Night in America. You can find all the info at worshipnightinamerica.com. I'm shaking in my boots when I think about it, because I can't believe it's happening, and it's going to be something really, really special across the nation as the church comes to pray. It's going to be amazing with the synergy God is bringing with some of the pastors, I could go on for the next hour about what God is doing with the synergy there, but yeah, we're doin' it!