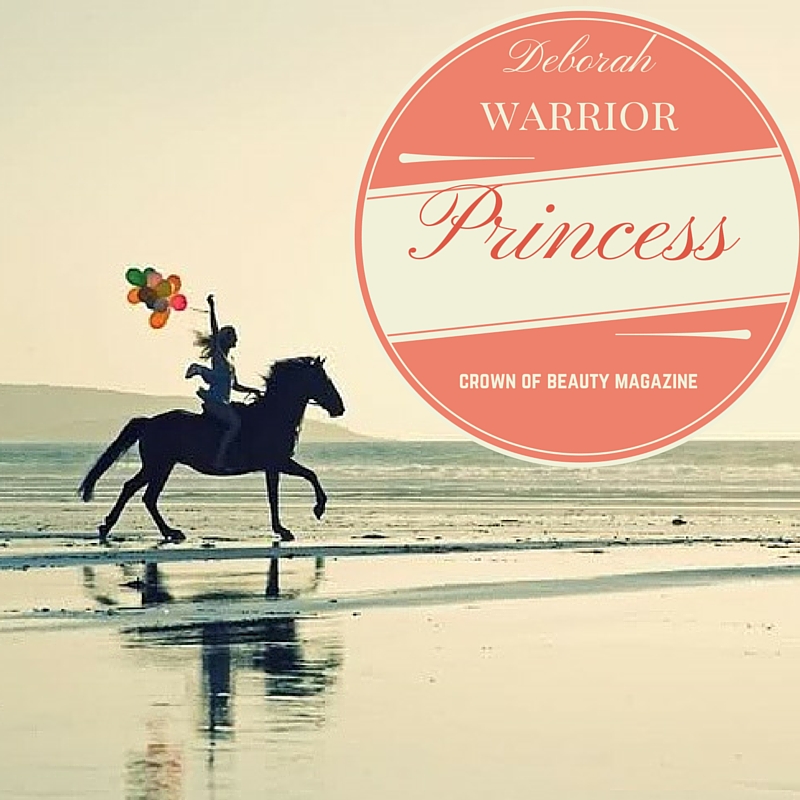 We all love the story of Deborah. Something awakens inside of us when we hear the story of this brave Warrior Princess.

When we look at Deborah, it feels like she was almost living ahead of her time. Her role in the Bible was stunning. She was a Prophetess and a Judge, ruling over the political and personal matters of the people of Israel. Using the governmental structure that Moses set up, it was her job to see to the affairs of her people, just like a Queen would.
Every great story requires an evil plot, and this story definitely has one! In Deborah's day, darkness covered the land as a group of fearsome bullies took advantage of Israel and terrorized them. This enemy oppression had been going on for twenty years, and the Lord was ready to end it!

Apparently, God had already said something about this before, because at the beginning of her story, Deborah sent a reminder message to Barak, a commander of the Israelite army. "Has not the Lord God of Israel commanded, 'Go and deploy troops at Mount Tabor, take with you ten thousand men...I will deliver him into your hand.'?"  {Judges 4:6}

She nudged Barak with this promise. The victory was already theirs! All they had to do was rise up and ride into battle.

Whenever I read this part, I can't help but laugh. Not because Barak sounds like a coward, but because all too often, I sound just like Barak.
It's so easy for us to say to our friends, "If you do it, I'll do it. If you think this is a good idea, and you approve of me, then I want to do it. But if I don't have your approval and applause, and I'm left standing all alone here, then I'm not going to do it."

Deborah had a different perspective. She had the perspective that all heroes must have. She had Heaven's perspective. Which meant, she feared God and NOT man. She didn't take man's opinion into account when she made her decision. She wasn't a people pleaser. She was a God pleaser!

She told Barak, "I will surely go with you, nonetheless, the honor shall not be yours on the journey you are about to take, for the Lord will sell Sisera into the hands of a woman.” {Judges 4:9}

There are so many things that I admire about Deborah, but my favorite thing is her daily decision to be bold and take action. She saw something was wrong, and so she did something about it. Simple as that. She didn't need a pat on the back, her BFF”s approval, or applause from her people. Deborah decided that something else was more important than fear, and that was the freedom of God's people! Her love for others swallowed up any concern for herself, her own safety, or well-being. Like Esther, she must have said to herself, "If I perish, I perish." {Esther 4:16}

She had already conquered the fear of death, and defeated the monster of self-preservation. She was able to give her all, because she didn't believe that her life was her own. She knew that her every breath belonged to God.
In the New Testament, Paul really urges us to sink our teeth into this truth. We are already dead. Our lives are not our own. We are hidden with Christ, and everything we are belongs to Him. {Check out Colossions 3:3, Romans 12:1 & Galatians 2:20}

If we embrace this perspective (the fact that we are dead and hidden in Christ!), when God asks us to do hard things, it's no longer an inner battle to decide whether we're going to obey or not. It's our second nature. Of course we are going to give everything, because we already belong to Him! We are walking dead people! We have nothing to fear! You can't harm or kill someone who is already dead!
We shouldn't need a cheerleader, a pep talk, or a well meaning friend to confirm, "Yes, you should be obedient to God."

If you see someone suffering, just go do something about it. If you see a situation where the enemy has the upper hand, go make a difference! Bring Heaven into that situation! It is our royal identity! The overwhelming desire to bring justice and mercy wherever we go, courses through our veins, because we belong to the King of Kings.
God has established his throne on righteousness and justice. It is only natural, that like Debroah, we should ride out to battle without being asked.

After the miraculous victory of defeating the enemy commander (read all of Judges 4 & 5 to get the whole story!), Deborah and Barak started singing. Their voices rang out,
"When leaders lead in Israel, when the people willingly offer themselves, bless the Lord!" {Judges 5:2}

Deborah was willing to lead. She was willing to do hard things. She understood her royal role as a Queen in God's Kingdom, and so she lived out of that reality.

Jesus has already given us the command to Go. Our job is the same as Deborah's. To ride out fearlessly into battle, lifting high the banner of our King, declaring that the victory belongs to Him! So will you war with prayer? Will you war with your actions of kindness and your words of love? Will you ride out and love the un-lovable? Will you share the Gospel, comfort the hurting, and dispell the darkness?

Sister, just like Esther, Debroah, Mary, and all of the Godly women who have gone on before us, you have been called to the Kingdom for SUCH a time as this! {Esther 4:14}


This is your moment. Ride on.