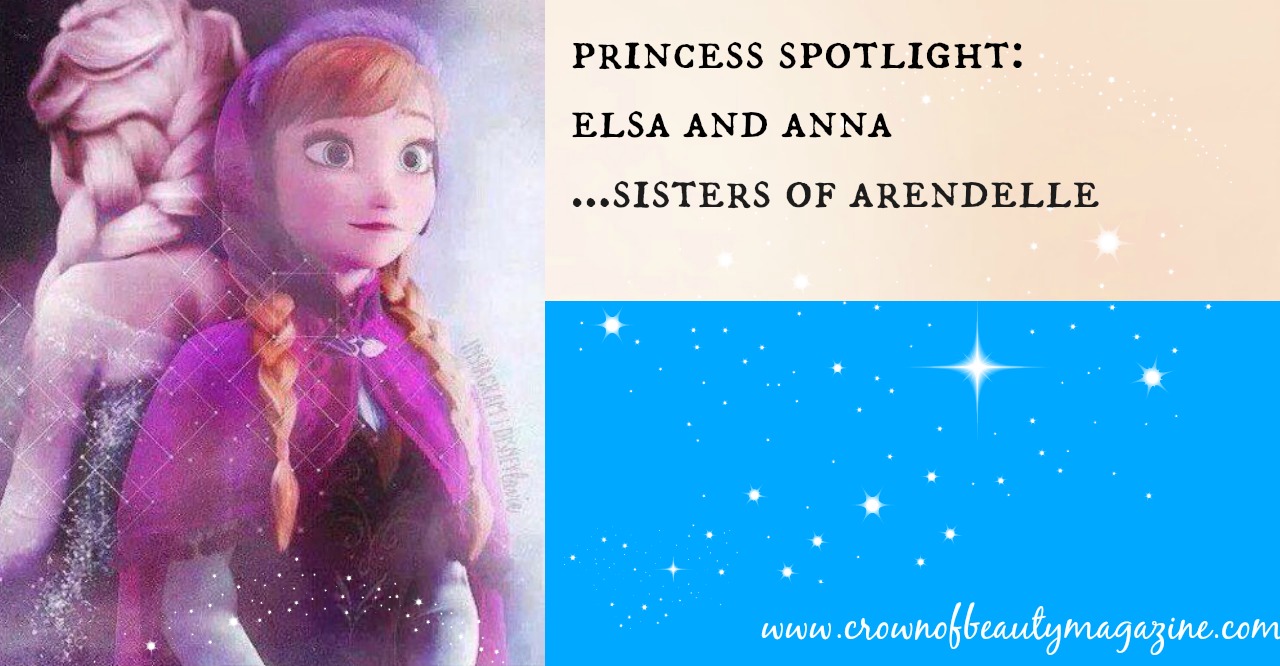 If you could’ve seen my Facebook in the weeks leading up to last years Thanksgiving release of Disney’s Frozen, you’d probably have defriended me because my profile was plastered with Frozen-related posts, links, video clips, and even my cover and profile photos were Frozen. I think it’s safe to say I was a wee bit obsessed.
When I saw the movie the day before Thanksgiving, I was not disappointed. Frozen is easily one of my top favorite Disney films of all times (right up there with Beauty and the Beast and Tangled). Not only are the music and animation stunning, but the character development, lessons, symbolism, and plot twists are nothing short of amazing. Of all my favorite parts though, my most favorite aspect is the lessons we learn from Anna and Elsa.
If you haven’t seen the movie yet, it’s basically the story of two sisters, Elsa and Anna, the princesses of Arendelle. Elsa, the oldest, was born with the power to create snow and ice – an ability as beautiful as itis dangerous. One night when the girls were little, there was an accident while they were playing – an accident that nearly cost Anna her life. After that incident, Elsa grew so afraid of accidentally hurting her sister again that she pulled away completely and became like a stranger to Anna, who never remembered the incident and grew up feeling hurt and rejected by her sister. Fast-forward to the present, where something goes wrong on the night of Elsa’s coronation as Queen of Arendelle. She runs away in fear, and without meaning to, sets off a magical winter that overtakes Arendelle (a fact that she doesn’t find out about till later). Anna goes on a quest to find her sister, make things right, and bring back summer.
There are so many lessons we can learn from these two royal sisters.

PRINCESS PRINCIPLE #1 -
The first lesson is that there is no one type of princess – princesses come in all styles. If we look at Anna and Elsa, we’ll see that although the two sisters share some similarities (family, royal blood, love of chocolate and singing), they have vastly different personalities. Anna is warm, bubbly, outgoing, clumsy, and caring. She wears dark blues, pinks, and greens – colors which speak of life and vivacity. Elsa, on the other hand, is elegant, reserved, graceful, fearful, and regal. She wears light blues, purples, and teals – colors which speak of dignity and ice. In the end, we see Elsa break out of her shell and demonstrate the fun-loving, spirited fire inside her heart, but she is still more reserved than her sister. Neither of these types of personalities, nor any other type of personality, have a monopoly on being a princess. So just because you may not like certain things, carry yourself in certain ways, or interact with other people in ways that some princess characters do, does not mean that you cannot be a princess. You have the freedom to be a princess and be who you are. You don’t have to fit a mold. Be yourself, unafraid of your uniqueness. And learn to also appreciate the uniqueness of the other princesses around you. Just like we love seeing Anna and Elsa’s different personalities interact, so too it’s a beautiful thing when God’s princesses embrace the strengths and weaknesses of each other, build each other up, and love their differences.

PRINCESS PRINCIPLE #2-
The second lesson is that neither singleness nor marriage are better than the other. Both are beautiful callings given by the Lord. For some, singleness is a season that precedes marriage. For others, singleness is not just a season, but God’s life calling. The beautiful example we see in Frozen is that both sisters have very different paths, but both are shown to be equally beautiful. Elsa remains single – there is no romantic love interest in her story. Anna ends up with a super-sweet guy who loves her for who she is. But this major difference does not create any sort of friction between the sisters. Neither is one’s life portrayed as better than the other’s. Rather, it is a lovely example of how the sisters’ love for each other is not dependent on circumstances or relationship statuses – they are both free to enjoy their own path, and be happy for the other. This is an example we should all seek to follow – not envying others’ paths or feeling down about our own, but being grateful for what God has given us, and simultaneously being happy for the ones we love, recognizing that our different paths are both pleasing to the Lord. The third lesson is that romantic love is not the most important love, nor is “true love” only romantic.
In a stunning twist of fairytale clichés, Frozen demonstrates that true love is that which is selfless, and it can be between friends and/or family. When Anna chooses to sacrifice herself to save her sister, it is an example of true love. Her decision in the beginning to go after her sister despite all the misunderstandings and hurt between them, is true love. Elsa’s desire to protect her sister from herself is true love. And while romantic love is indeed celebrated in the film, it is simply one of many different forms of true love that this movie teaches us to appreciate. This is a refreshing change for those of us who feel left out because there is no guy on the horizon right now. It’s a reminder to not focus so much on the human “Prince Charming” aspect of life, and to recognize the true gift we have in family and friends.

So Princess, wherever you find yourself right now - happy with who you are or struggling to find confidence in your identity, single or in a relationship, focused on romantic love or having a healthy balance of all forms of true love - take notes from the two princesses of Arandelle. You are a princess no matter what your personality is.
Your life is beautiful and complete in Jesus whether or not you are in a relationship with a guy, and true love is not limited to romance.
So take heart, and spend some time appreciating the people in your life who love you as you are.

check out more princess articles like this one in the royalty issue!