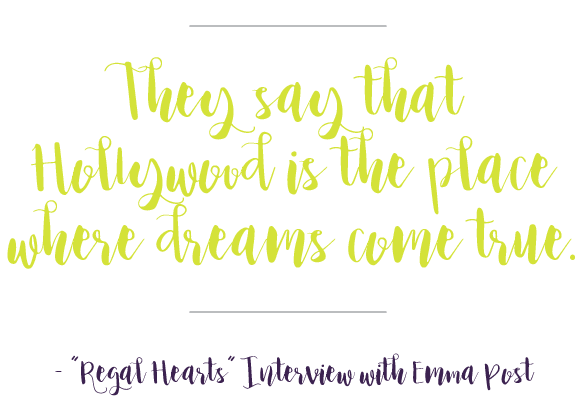 They say that Hollywood is the place where dreams come true.

But that’s usually only spoken by people who have never stepped foot into Hollywood.

The real Hollywood, the merciless, cut-throat, heartless industry that my Mom and I know – is far from a fairytale. Oh, I suppose before I carry on with my heated rant about everything that is wrong with the city of stars, I should pause to introduce myself.

I’m not the daughter of a high-paid reality TV star with an attention grabbing name, or a gorgeous movie-star-wanna-be who’s kicking and clawing to get her big break. I’m just Emma. A relatively short, average-faced, glasses-wearing, somewhat-frizzy-brunette-hair, pony-tail wearing, book-reading, EMMA. And I’m not kidding about the book-reading. Books are the only boyfriend I’ve ever had (or ever care to, for that matter!) and they’re the only accessory needed for me to leave the house. My best friend, who is far more style-conscience than I, claims that my overly-obsessive-reading habit has cursed me with an unfixable posture, slouched shoulders, and a non-existent social life.

Well, she’s probably right about the last point. But I wouldn't trade my book collection for even the most coveted of social lives.

I find fictional characters far more magnetic than anyone I might bump into in the real world. Anyway, now that you have a bit more background about me and my un-exceptionally average personality, let’s return to the rant, shall we?

I considered titling this post, “Everything You Don’t Want to Know about the Headliners of Hollywood”, but I thought it might come off a little too strong. I can already see the dramatic comments, firing at me like arrows, declaring that I must be burned at the stake for speaking such heresies against their beloved, teen-heartthrob, Logan Sparks! (Let me tell you, Logan Nation is a passionate bunch. If you dare criticize their swoon-worthy-superstar, they come after you with pitchforks!) I can imagine their speedy little fingers typing emotional responses, questioning my reasoning for such a post.

“You don’t know what you’re talking about!” They would cry, “You’ve never even met our Logan, or any of these other A-listers! You’re just a whine-y, selfish, unhappy crab, hating on our perfectly perfect men!”

Uh okay. Think whatever you like, Logan Nation. But the truth is, I live much closer to Hollywood than you do. (Yikes, did that sound a little harsh? Let me rephrase that, I don’t want you to think I’m actually proud about this fact. I live much closer to Hollywood than I would ever want to.) You see, my Mom’s job brought she and I out to California about 7 years ago, and we’ve been navigating our way through the treacherous waters of Hollywood ever since. Her duel job as a Talent Scout and Artist Manager gives us a front-row-seat to everything the rest of this world never sees. My purpose in sharing this information with you, isn’t so that you’ll drool and say, “Ughhh she’s so lucky, always brushing elbows with so many big name stars!” Instead, I’m hoping that I can remove the glitter and glam from your rose-colored glasses, and give you a glimpse at what things are really like in Hollywood.

In this industry, there’s a massive, underground machine in motion. It’s like a secret-world of unspoken rules that nobody really knows who made up, but everyone abides by. The machine rumbles along with every part in motion; starry-eyed-teens who want to be famous, multi-million dollar industries who need stars to sell their stuff, marketing guru’s, ditzy fans who want something pretty to obsess over, heartless magazines who exploit starving models and sell clothes made by young women in third-world-countries who suffer social injustice. 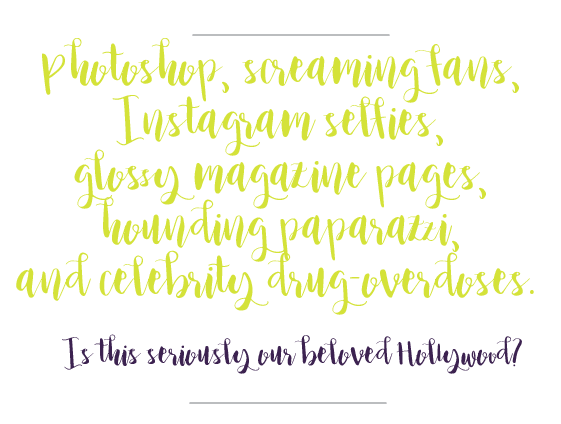 Are these the things we want our generation to be remembered for? Is this what we all Tweet about, squeal about, sing along to in the car, and spend our hard-earned money on? Forgive me for sounding like a tropical storm-cloud who’s about to send a typhoon through all your sparkly little Hollywood dreams, but I’ve seen too many perky teen stars lose their souls in this heartless machine...

read the rest of emma's post at skg fun!

Or, get to know Emma in Regal Hearts Episode 1!