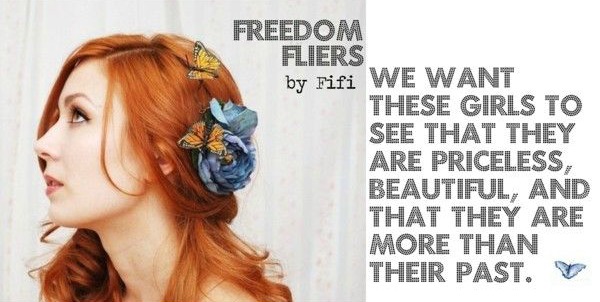 By selling handmade items with a butterfly theme, we are working to support the women escaping prostitution, and raising awareness about those still trapped in the system. We want these girls to see that they are priceless, beautiful, and that they are more than their past.

Slavery. I'm sure you're familiar with the word. We've all learned about it in school. We all know the story of The Civil War, and how we fought (many people would say) for the end of slavery. We all know about the Thirteenth Amendment that called for the outlawing of the slave trade. But what many people don't realize is that slavery still exists today. And not just in third-world countries. Slavery exists right in the heart of our beloved country. A country that outlawed slavery hundreds of years ago. And yet it happens. Right here in the great United States of America. Human trafficking.


Many times mistaken for consenting prostitution, human trafficking is a horrible yet flourishing industry in big cities around the world. And it's such a misunderstood crime. There is a certain amount of confusion as to who exactly is a victim in this crime. When I say "victim of human trafficking", what comes to mind?

Probably a teen girl, locked up in a dark room, with no food, no water, and no pay. And certainly that does happen! But there are other ways of forcing women into prostitution. Blackmail. Threatening their family. Promises of money, love, or even drugs. And because of this misconception, many girls and women are stuck in a seemingly endless cycle from which they see no escape.

The sad part? We as Christians and the public in general is mostly unaware of this monstrosity that's going on in the rougher parts of town, and all over the world.

"Speak up for those who cannot speak for themselves,
for the rights of all who are destitute."
Proverbs 31:8


But how did the girls at Crown of Beauty Magazine decide to get involved in this? And why? Well, it all began on the Girl Talk forum. A few of us wanted Crown of Beauty to get involved in something bigger than ourselves. We wanted to help those who couldn't help themselves. And one of the biggest groups of people who cannot help themselves and yet get so little help from others?

The victims of human trafficking.

Those misconceptions I mentioned? Because of those, people tend to be very unsympathetic of people who appear to be prostitutes. While causes like animal rights and "the fight against global warming" get hundreds of thousands of dollars each year, helping get women out of the prostitution business (forced or not) gets little to no publicity or funding. Even though awareness is slowly spreading, and God is doing amazing things to set captives free, it's still not enough.

Why not? Because there is still an estimated 1.2 million children being victimized by human trafficking every year.

Even if the staggering one million number dropped down to a one...that would still be one girl too many.

When the girls at CoB started learning about the horrors of human trafficking, we felt these people were the ones who needed our help. These girls who are shamed into silence- these are the ones we need to support. Through much contemplation and deliberation, "Freedom Fliers" was born.

"Freedom Fliers" is the simple cooperation of the girls at CoB, joining together to raise funding and awareness of the fight for women and girls stuck in prostitution. By selling handmade items with a butterfly theme, we are working to support the women escaping prostitution, and raising awareness about those still trapped in the system. We want these girls to see that they are priceless, beautiful, and that they are more than their past.


Want to get involved with
Freedom Fliers?

We are in need of girls just like you to share their crafting talents and handmade items! We're creating items with a butterfly theme. If you're interested in donating an item or two, contact us at: crownofbeautymagazine@yahoo.com

Once completed, these packages will be sold on our website to those who would like to help stop human trafficking. Pray about how you can jump on board with us! One girl got her whole youth group involved!

More information about Freedom Fliers will be revealed soon. Be sure to stay tuned, and be praying about how you can be a part of Freedom Fliers!