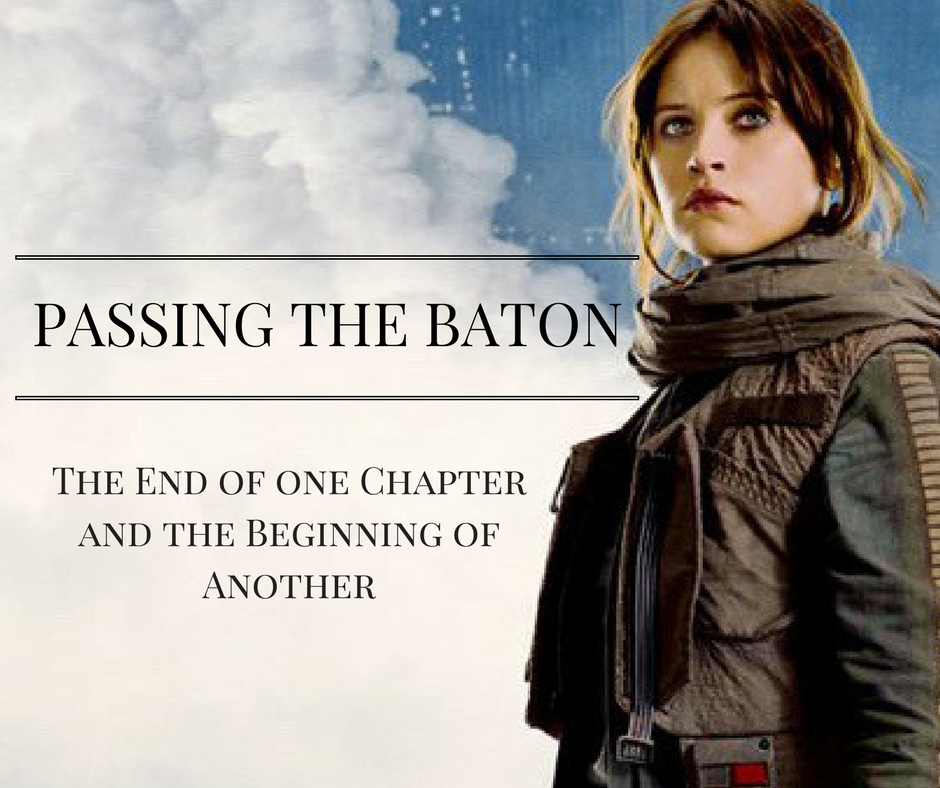 When I first saw the trailer for Rouge One: A Star Wars Story, I’m going to be completely honest with you. I wasn’t impressed. As a lifelong Star Wars fan, my reaction wasn’t the one Disney hoped I would have. I wasn’t interested, nor was I planning on watching it.

But then, after my brother returned from the theater all wide-eyed and mystified, he declared that it was a must see. So I did what all lukewarm audience members do: I waited until Rouge One came out on DVD.

I finally rented it, popped the DVD in my computer and allowed myself to slowly become immersed in the adventure. I was pleased to quickly discover that Rouge One was indeed connected to the master Star Wars story. (You know, the main story line theme that threads through the entire galaxy?) I love when things that don’t seem like they should connect, actually do, so that in and of itself got my wheels turning.

The goal and mission of these previously unknown characters quickly became obvious. Jyn, the determined leading lady, had to get a holographic message safely into the hands of Rebel Leaders. (Who, spoiler alert, just so happens to be at the end: Princess Leia!) Rouge One creates a bit of a connecting bridge between tales, giving more backstory as to the fight and sacrifice required by each Rebel to get the important message to the point where we find it in Episode 3: A New Hope.

While watching a myriad of characters risk their lives and give their all for the sake of delivering this message and passing the baton forward, I couldn’t help but think about the Bible. As Darth Vador smashed through doorways and walls, attacking anyone who he assumed might have possession of this message, I thought about the First Century Church and the fight they went through to spread the Gospel across the earth.

Just like in Rouge One, First Century Christians, had a most vital and important message to share: The Gospel of Jesus Christ! But it wasn’t an easy task. Leaders were killed and anyone who bore the name of Christ was a target for persecution.

The lives lost in Rouge One caused me to think about all of the blood spilled by our ancestors (and even our brothers and sisters across the world who are being persecuted today) and the forefathers of our faith. They sacrificed everything in order to see the Gospel move forward. Rouge One offered a physical example of a spiritual principle: passing the baton of faith forward, through even the roughest and most dire of circumstances.

Sometimes, watching a film like Rouge One can be depressing. When lives are swiftly ended, right before our eyes, and the characters don’t reach their desired happily ever after, it’s easy to feel like the enemy is winning. If we zoom in and look at the individual stories of those who have gone before us, it might appear as though they lost too. Hebrews 11:36-39 says:

“Still others had trials of mocking’s and scourging's, yes, and of chains and imprisonment. They were stoned, they were sawn in two, were tempted, and were slain with the sword. They wandered about in sheepskins and goatskins, being destitute, afflicted, tormented – of whom the world was not worthy. They wondered in deserts, in mountains, in dens and caves of the earth.”

Yikes. At first glance, it does not sound as though those people had very successful lives. These prophets were persecuted, attacked, and nobody believed the messages they were trying to share from heaven. Just like in Rouge One, it appears as though these people have failed, and were not able to obtain a successful and cheerful ending.

“And all these, having obtained a good testimony through faith, did not receive the promise. God provided something better for us, that they should not be made perfect apart from us.”

The prophets who came before Christ, didn’t get to see the promise. As they fought and believed and paved the way, their faith was strengthened and their lives had an impact on eternity. The world might say that their lives were spent in vain, a complete waste, since they never gained the worlds idea of “success”.

No, they didn’t receive the promise that they spoke of and believed for during their lifetime. Neither did the Rebels in Rouge One. But they believed in a new hope. They believed that someday their children's grandchildren would see the promise. And now, if we zoom out and trace these ancient stories to OUR stories, we see that the connection has been made. “God provided something better for us, that they should not be made perfect apart from us.”

Because of the sacrifices that our ancestors made, we are reaping the benefits of that today. We have the Bible, because brave souls were willing to run through underground tunnels and get the one remaining copy left of the written Word of God safely delivered to their friend, before being brutally murdered. Despite all the ways Darth Vador (Satan) has tried to slash his sabor of death against us, God’s Word has continued to prevail! God cannot be stopped! Even when His children are slain, the message goes on. The Word of God is continually moving forward, pressing from one generation to the next, ensuring that there is a remnant.

Sisters, we are the remnant. The baton of the Gospel has been passed onto us. Therefore we must zoom out and remember that our stories are not individual units: rather they are all connected! Our stories each intertwine with the master saga, the epic tale that God is writing across the canvas of history!

“Therefore we also, since we are surrounded by so great a cloud of witnesses, let us lay aside every weight and the sin which so easily ensnares us, and let us run the race that is set before us, looking unto Jesus, the author and finisher of our faith…” (12:1-2)

The baton is in our hands. Those who have run before us, are surrounding and cheering us on. They want us to zoom out, abandon the selfish obsession we have with our own little worlds, and remember the big picture. Let's remember what God is doing! Let’s remember that we are part of something so much larger than ourselves! What are we going to do to move this story forward? How are we going to fervently spread the Gospel and see to it that everything we’ve learned safely gets into the hands of this next generation?

The interesting thing about relay races, is that it doesn’t matter how good the earlier runners did…everyone has to run well. If this generation drops the baton and grows discouraged by what we see happening around us, the previous’ generations accomplishments are not going to make up for it. We need to run, and we need to run well. We must remind ourselves of the price paid throughout history in order for us to be standing in the field of freedom that we are today. We must also think ahead to the future generations, and remember that the choices we make today, will impact them tomorrow. Watching a movie like Rouge One helps us to remember that our stories do not end when our last breath is released. What we do impacts generations to come, and God wants us to live with eternity in mind.

In today’s world, it’s really easy to become self-absorbed and believe that our actions don’t affect anyone but ourselves. But that simply isn’t true. We get to be part of a greater story, a story that continues even when we fall, even when we have a bad day, and even when it feels like darkness is going to swallow us up! God always has a plan! He will do whatever it takes to get His message moving forward, and if we chose to stand up and join in on the action, we can be part of this epic adventure!

The End of One Chapter and the Beginning of Another

As I write these words, God is ending a chapter in my life. A chapter that I’ve been completely immersed in for the past four years. The chapter called, Crown of Beauty Magazine.

When I reflect on the past years, I am completely awestruck by all the ways God has used this magazine to touch my sisters in Christ across the globe. I’ve made so many wonderful friends, walked through spectacular experiences, written books, hosted conferences, and been through many highs and lows with the Lord!

But I’ve always felt like at the end of the day, my deepest desire has been to set a fire in your soul. To stir up the embers of your God-given dreams and come alongside of you and say, “Go for it, sister! God’s got an amazing plan for your life! I want to see you set out and fly!”

And so many of you have. I’ve received dozens of emails from young women who were inspired to start their own blogs, websites, or Bible Study group with their friends! Some have decided to write books, and others even decided to plan a conference or being mentoring a sister in Christ!

And I know this is just the beginning. As God’s daughters, you each have so much priceless treasure stored up inside of your souls. And God is encouraging you to open up your mouth and release it! He wants you to take the fish and the loaves that He has placed in your hands, and step out in faith!

He wants you to believe for the impossible. He wants you to start that blog, write that book, share the gospel with that friend…sister, only You know what He has been whispering to your heart.

But I want you to know that this is your confirmation. If you’ve been afraid to step out and have been waiting for an extra “Thumbs Up” from God to know that you’re on the right track, then here it is my dear! I am passing you the baton. I’m encouraging you to grip whatever it is that God has for you, with both your hands, and all your heart. Take the challenge, and run with it. Embrace your visions and allow them to soar. Lace up your shoes and run this race!

My prayer for you, is that you’ll dare to believe. You’ll dare to follow the King of Kings wherever He leads and that fear will have no place in your life. My prayer is that Crown of Beauty’s end, will birth the beginning of something beautiful in your life.

Although I know that this news will be disappointing to some, don't allow it to discourage you. Instead of lamenting over the fact that we won't be publishing new magazine issues, perhaps it's time for you to start making your own magazine, blog, or website!

Sister, the time is now. God is on the move, and He wants you to move with Him! So don’t stand by the sidelines. Don’t be discouraged by the darkness. Rise up, and take your place in His Kingdom. Like Esther, dress yourself in the royal robes of your identity in Him, and get ready for an adventure.

It’s all for the King! The Kingdoms of this earth are becoming the Kingdoms of our God. We have nothing to fear. He is the Champion of Heaven, and we are already victors through His Cross.

So carry on, sisters. Run with everything you have. Let us run into this brand new chapter, knowing that if we stay consistent and run the course, God will be faithful to bring His happily ever after.