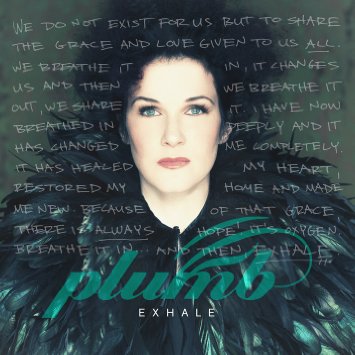 A huge part of being on the Crown of Beauty Team, means sending lots of emails, making phone calls, and interviewing some of our favorite artists in the Christian music genre.
Samantha got to chat with Plumb, whose newest album Exhale has just hit stores. {Check it out here}
Here's a peek at their conversation!

Plumb: Hello, this is Plumb!

CoB: Hello! Thank you so much for setting this up with me. I loved being able to listen to your new album! I have a couple questions for you:

CoB: How did you get started in music?

Plumb: I just sang my whole life in any chance I could from chorus at school to choir at church to coffee shops, nursing homes, homeless shelters, you name it. I was asked to sing back up for a recording artist, and that lead to singing back up for another and another. And that led to some studio work for other artists in Nashville, so I moved. I found that singing in a studio was kind of my bread and butter for about 18 months. Then a label called and wanted to sign me. The rest is kinda history. I think it was just a number of opportunities I was presented with that I had to just be willing to say yes to and recognize when I was being told no! *laughs* It lead to this. I wanted to be a nurse, but I was really terrible in school, especially chemistry, so I was pretty discouraged about what college would look like for me. But I always sang. I never aspired to be a recording artist or a professional musician. I just enjoyed singing, and here we are! I’m really thankful that God knows better than we do!

CoB: Where is your favorite place to write your music?

Plumb: If I had to pick just one place it would be at my aunt’s house, because I’ve probably written over 85% of my music there. Sometimes I’m even there just by myself. It’s just a really inspiring and peaceful place where I feel like myself. I feel like I’ve written my best songs and am the most productive there.

CoB: Your newest album, Exhale, was written coming out of a dark place. Was there a specific verse, or something somebody said, or a thought that began that process of healing and led to the writing of this album?

Plumb: My husband and I had split up and we were getting a divorce. We ended up reconciling and remarrying each other, so through the course of that our marriage was not only salvaged but made new and better than before and our family was kept together. I was just so incredibly thankful for what God did, and I had just started writing out of the experiences I was going through in that season. You know, one song in particular was kind of burst out of me sitting in a Starbucks parking lot one night in the rain and not really knowing where to turn in my Bible. It was the third day of the month so I turned to Proverbs 3 because I didn’t know where else to go. In reading that something really stood out to me. It was verse (24) that says ‘Don’t be afraid of sudden panic. I’ve got you, and I will hold you tightly to you and not go of you. Your sleep will be sweet.” In this season where I was not resting well and in a really dark and distraught place, the fact that God was promising me that He had me no matter how far away He seemed [was important to me]. He was still holding me and my sleep would be sweet. Something about that just seemed so restful and peaceful and beautiful in a season where I felt so stressed out and so the opposite of peace and all of that. There is also Exhale, the title track, which is about a moment where I heard my pastor say something that impacted me and spoke to the story that I had been living and been rescued from. The pastor said, “You know, we actually exist to share the love and grace that has been given to us all. We breathe it in, it breaks our hearts, it changes us, and then we breathe out.” I think especially to young adults who ask “What am I supposed to do with my life and in my career?”, even if you’re out of school. They ask “What is God’s will and what am I supposed to do with my life?” God doesn’t really need us. God wants us. And what God’s going to do, what He wants to do, he’s going to do that, with or without us. It’s very freeing to know that God just wants you to be a part of what He’s doing. He will do it anyway. When we don’t follow His plan, we’re the ones that miss out. But God, in His infinite grace and mercy and forgiveness, lets you start over as many times as you need to. And whatever He calls you to, He calls you to breathe in His grace and exhale it to those around you. So wherever you are, do this, and God will do the rest. God teaches through every moment in your life.

CoB: What is your favorite song off the Exhale album?

Plumb: Smoke. It was inspired by the crash and burn of my life and it going up in flames. Smoke is not breathable, and ash is worthless, but when I truly let go of all of that and just rested in Him, He turned the smoke into oxygen for my lungs and the ash into beauty. I know it sounds poetic, but He actually did it! I would go out every night and I would breathe out a story that was once unbreathable, dead, smoke: a dead marriage and a dead lifestyle. He took it and made life out of it. Singing this song is my favorite point of my show. I don’t think I’ve made it through the whole thing without crying yet. It’s just like, “You are my shelter when it all goes up in smoke.” At the tail end of it there’s just this chant of “my Healer, Provider, my God, my Protector, my Strength, and Shield.” He is all of this. We get so wrapped up in so much fear, and I want this record to set people free.

CoB: What is the story behind your song “Champion”?

Plumb: My friend Sarah had started writing that. She played it for me at her house one day. I asked if I could take it and make it my own and she said “yeah, really?” I said, “that is exactly how I feel about Jesus.” He fought for me and my husband’s marriage. He fought for our family. The way that He went about it, the way that He is going to continue to be about it, He was fighting for us, dying for us, and conquering Hell for us and coming back to life. He is willing to do that every day for us. When she played it for me, I was very emotional. He did not give up. He didn’t hold back. He is our Champion.

Plumb: I have two. Really super dark purple, obviously the color plumb, *laughs*, and black and white together.

Plumb: You think I’d know, but I have to think about it for a second. I would probably say Chicken Pecan Marsalla, which is an Indian dish. I don’t think there’s a day in my life I wouldn’t enjoy eating that.

Plumb: I love Starbucks! I get their Chi Tea Lattes with coconut milk.

Plumb: Isaiah 41:10, which says “Fear not, for I am with you. Be not dismayed, for I am your God. I will strengthen you; yes, I will help you. And I will uphold you with my righteous right hand.” When I hear that, I feel fought for, I feel protected, and when I’m really scared it makes me feel blessed.

CoB: Favorite Place?
Plumb: With my husband and children wherever we are. But my favorite location is home with them on our super comfortable couch in our family room. Being on that couch with my husband and our three kids is pretty close to Heaven.

Plumb: I confess I’m not super into princesses, but I do like that Cinderella was a servant whose attitude was beautiful. That she was a servant makes her a princess.

Plumb: The song is a little controversial, but it’s called Tony by Patti Griffin. It tells a story of a classmate of hers who felt alone. He committed suicide. The song is her confessing that she should have spoken up and befriended him, because even though she wasn’t going through the same thing that he was, she had her own stuff. That makes us all the same: we’re all human and we all have struggles. She wished that she had spoken up and said “hey, you’re not alone” and had befriended him. It’s an anti-bullying song, and there’s something very spiritual about it, about just rising up and standing up for what is right, regardless of what may or may not seem acceptable.
~*~